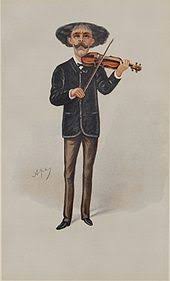 He is the greatist violinist in 19th century.

The popularity of Sarasate’s Spanish flavour in his compositions is reflected in the work of his contemporaries. For example, the influences of Spanish music can be heard in such notable works as Édouard Lalo‘sSymphonie Espagnole which was dedicated to Sarasate; Georges Bizet‘s Carmen; and Camille Saint-Saëns‘ Introduction and Rondo Capriccioso, written expressly for Sarasate and dedicated to him.

One of critics praised him as genius, then he said like that.

“Genius?  How am I genius? I have practiced on the violin for 14 hours every day for 37 years.”