Why do we need the new covenant?

How can we know that the new covenant is written on our hearts?

Or, what’s the reason we don’t realize this fact?

The Apostle Paul says it’s because our hearts are covered.
Therefore, since we have such a hope, we are very bold. We are not like Moses, who would put a veil over his face to keep the Israelites from gazing at it while the radiance was fading away. But their minds were made dull, for to this day the same veil remains when the old covenant is read. It has not been removed, because only in Christ is it taken away. Even to this day when Moses is read, a veil covers their hearts. But whenever anyone turns to the Lord, the veil is taken away. (2 Corinthians 3:12-16)
Here, the veil Moses wore was used to cover his face. That is, it was a veil covering his face. The Apostle Paul pointed out that this veil prevents people from understanding the words of God when they look at them with the veil covered. In other words, we cannot realize the new covenant correctly due to the veil which covers our hearts. However, it’s written, “whenever anyone turns to the Lord, the veil is taken away.” How can we return to God?
Hezekiah sent word to all Israel and Judah and also wrote letters to Ephraim and Manasseh, inviting them to come to the temple of the LORD in Jerusalem and celebrate the Passover to the LORD, the God of Israel… “… If you return to the LORD, then your brothers and your children will be shown compassion by their captors and will come back to this land, for the LORD your God is gracious and compassionate. He will not turn his face from you if you return to him.” (2 Chronicles 30:1-9)
King Hezekiah sent messengers to the land of the northern kingdom of Israel as well as to the land of the southern kingdom of Judah to celebrate the Passover, the feast of God. When messengers arrived in Northern Israel, they encouraged to keep the Passover because it’s ‘the way to return to God.’ That is to say, the way we can return to God is to celebrate the Passover, which removes the veil which has covered our hearts. We can fully recognize the new covenant God wrote on our hearts by keeping the new covenant.
The Prophet Isaiah emphasized that keeping the new covenant removes the face of the covering and the veil which covers our minds.
On this mountain the LORD Almighty will prepare a feast of rich food for all peoples, a banquet of aged wine? the best of meats and the finest of wines. On this mountain he will destroy the shroud that enfolds all peoples, the sheet that covers all nations [And he will destroy in this mountain the face of the covering cast over all people, and the vail that is spread over all nations: KJV]; he will swallow up death forever. The Sovereign LORD will wipe away the tears from all faces; he will remove the disgrace of his people from all the earth. The LORD has spoken. (Isaiah 25:6-8)
Only the Passover wine can swallow up death forever. The Passover is referred to as “aged wine” because it has not been kept for a long time, or for more than 1,600 years, since it was abolished at the Council of Nicaea in AD 325 after Jesus established this feast of life as the new covenant. It’s written that the surface of the covering cast over all people and the veil that is spread over all nations will be removed when the Passover, which has not been celebrated for a long time, is restored. At last, the time comes when the new covenant God put on our hearts is revealed.
The heavenly law through which we can be children of God; The second covenant which cannot be understood without taking away the veil that covers our hearts. When we keep the Passover, we can fully realize it. For this reason, Jesus declared the Passover as ‘the new covenant.’
He took the cup in like manner after supper, saying, “This cup is the new covenant in my blood, that which is poured out for you. (Luke 22:20)
Here, “you” refers to God’s people who keep the Passover of the new covenant. The new covenant, or the Law of God, is revealed when the Passover is celebrated. And this covenant destroys the black veil cast over our hearts and leads us to the light of salvation. Therefore, the Prophet Isaiah prophesied that the Passover is the way of eternal life only God can give us.
In that day they will say, “Surely this is our God; we trusted in him, and he saved us. This is the LORD, we trusted in him; let us rejoice and be glad in his salvation.” (Isaiah 25:9) 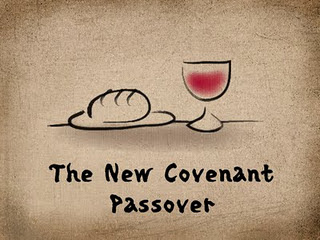