The reality of the city of refuge shown as its shadow

Hebrews 10:1
The law is only a shadow of the good things that are coming-not the realities themselves.

When the Israelites entered the land of Canaan in the Old Testament era, God let Moses make cities of refuge.

Numbers 35:11
Select some towns to be your cities of refuge, to which a person who has killed someone accidentally may flee...

​If so, if all these things that existed in the Old Testament are shadows, it means that the reality must exist.
From now on, let's find out the reality one by one.

​1.The reality of the high priest-- Jesus

Hebrews 5:8~10
Although he was a son, he learned obedience from what he suffered and, once made perfect,.....and was designated by God to be high priest in the order of Melchizedek.

​2.The reality of the hometown where the accidental murderers will return--Heavenly Kingdom.

Hebrews 11:13~16
All these people(the forefathers of faith)....And they admitted that they were aliens and strangers on earth....Instead, they were longing for a better country-- a heavenly one.

​If Jesus came to this earth as the high priest, and our hometown on the path of faith on this earth is heaven, then this earth must be the reality of the city of refuge that existed in the Old Testament era and we are sinners.

Then, how can we, sinners living in the earth, a spiritual refuge, get forgiven our sins and return to our hometown?
Sinners who entered the city of refuge were forgiven and returned to their hometown only by the death of the high priest.

​1 Peter 1:18~19
For you know that it was not with perishable things such as silver or gold that you were redeemed .....but with the precious blood of Christ, a lamb without blemish or defect.

​Jesus came to this earth as a high priest and sacrificed until death in order to open the way for us to be forgiven our sins and return to our hometown.
Then, how can we participate in the blood of Jesus?

​Hebrews 5:11
and was designated by God to be high priest in the order of Melchizedek. 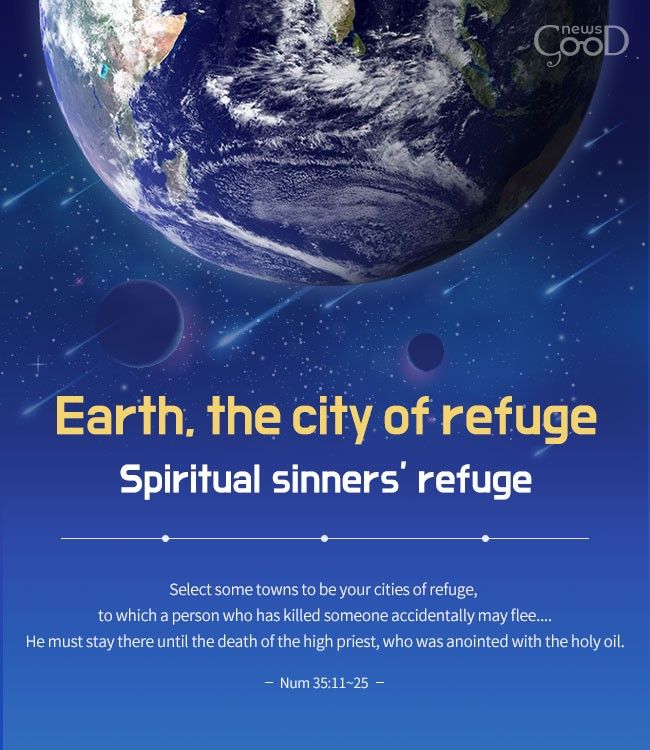 Total 12
« God the Father and God the Mother
Let’s rejoice that our names are written in heaven! »
List Reply
Edit Delete
Total 690
New
Powered by KBoard