The Last Supper inspired by the Passover of the Bible 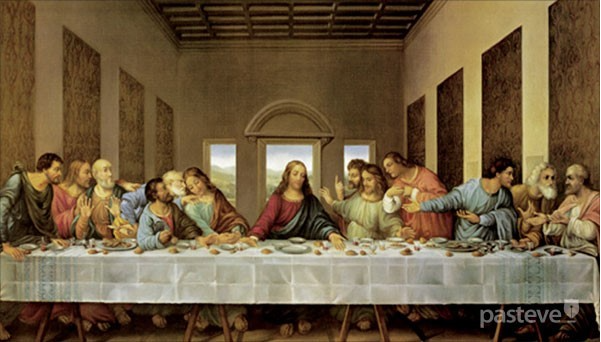 Many people know about the Last Supper of the Italian painter, Leonardo da Vinci.
This is a work inspired by the scene where Jesus kept the Passover with Twelve disciples.

If you look at the contents of Matthew Chapter 26 Verses 17 & 26, you can confirm this fact.

Mt 26:17, 26 On the first day of the Feast of Unleavened Bread, the disciples came to Jesus and asked, "Where do you want us to make preparations for you to eat the Passover?"
He replied, "Go into the city to a certain man and tell him, 'The Teacher says: My appointed time is near. I am going to celebrate the Passover with my disciples at your house.' "
So the disciples did as Jesus had directed them and prepared the Passover.

While they were eating, Jesus took bread, gave thanks and broke it, and gave it to his disciples, saying, "Take and eat; this is my body."
Then he took the cup, gave thanks and offered it to them, saying, "Drink from it, all of you.
This is my blood of the covenant, which is poured out for many for the forgiveness of sins.

Jesus promised the blessing of salvation and forgiveness of sins by giving the Passover bread as His flesh and the wine of the Passover as His blood.
It is the Passover of New Covenant, which allowed through the will of Jesus.

Isa 25:6, 8 On this mountain the LORD Almighty will prepare a feast of rich food for all peoples, a banquet of aged wine… he will swallow up death forever

During the Dark Age, the Passover has been disappeared and forgotten by people But, Now according to the prophecy of the Bible, the Passover has been restored and there are places that keep the Passover with the Biblical teaching. It is the church of God.
Total 15
« God is always on my side
Listen to Whatever Sarah Tells You »
List Reply
Edit Delete
Total 834
New
Powered by KBoard