What is the Testimony that We Have Faith to Be Saved?

Author
szaz
Date
2021-03-07 16:03
Views
1588
A great number of Christians insist that we can be saved by faith alone because we are already in the grace of Jesus 'sacrifice. The question is whether we have faith to be saved.

Then what is the testimony that we have faith to be saved ?

[ Anyone who believes in the Son of God has this testimony in his heart. Anyone who does not believe God has made him out to be a liar, because he has not believed the testimony God has given about his Son. And this is the testimony: God has given us eternal life, and this life
is in his Son. He who has the Son has life; he who does not have the Son of God does not
have life. ] 1 John 5:10~12

Those who have the Son of God (Jesus) have eternal life, but those who don't, don't have it.
Then how can we have the Son of God in us ? The Bible says that we can have Jesus in us through the truth of Passover of the New Covenant that enables us to eat His flesh and to drink His blood.

[While they were eating, Jesus took bread, gave thanks and broke it, and gave it to his
disciples, saying, "Take and eat; this is my body." Then he took the cup, gave thanks and
offered it to them, saying, "Drink from it, all of you. This is my blood of the covenant,
which is poured out for many for the forgiveness of sins. ] Matthew 26:19~26

Is it true that we can have eternal life through having Jesus's flesh and blood ? [Jesus said to them, "I tell you the truth, unless you eat the flesh of the Son of Man and drink his blood, you have no life in you. Whoever eats my flesh and drinks my blood has eternal life, and I will raise him up at the last day ] John 6:53~54

Therefore, the testimony that we have faith to be saved is Jesus' flesh and blood in us, taken from the Passover of the New Covenant. However if those who have faith in God, don't partake in the Passover, they can't have eternal life. That's why the Bible says that faith without deeds is useless and dead. In other words, our faith was made complete by our deeds.
Only Church in the world that celebrates the Passover of the New Covenant is the World
Mission Society Church of God. It means that its saints have the testimony that they have
faith to be saved. How bless we are! 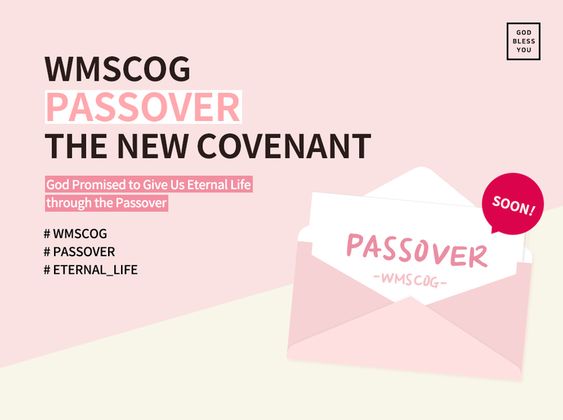 Total 7
« Let Us Go Toward the Glorious Kingdom of God
No longer have to keep the Sabbath day and the Passover due to Isaiah 1:13 ? »
List Reply
Edit Delete
Total 847
New
Powered by KBoard