God the Father (Christ Ahnsahnghong) said that there is our Mother ( God the Mother ) in heaven. Let’s find out about Heavenly Jerusalem Mother through the Bible.

The Church of God only follows the teachings of the Bible and believes in the Second Coming Christ Ahnsahnghong and Jerusalem Mother.

Have you ever thought about why we call God our Father?

It is written that God’s invisible qualities have been clearly seen and can be understood through what has been made (Rom. 1:20). Is there any creature that is given life through only their father, alone, without a mother being present?

We need to study this matter carefully.

The Children of Promise
The Bible calls us “the children of promise.”

Gal. 4:28 『Now you, brothers, like Isaac, are children of promise.』

Then, what promise did God make to those who are called the children of promise? God promised them eternal life.

How is eternal life given to us? The Bible says that all things were created by God’s will (Rev. 4:11). Among all of the many creatures that God has created, let us focus on the mothers. Since it is written that God created all things by His will, a certain will of God was expressed when He created mothers on this earth. As you know, all creatures have a mother figure. There is not a single creature that can come into existence without a mother.

God’s Two Images
Let us study through the Bible to discover the existence of our spiritual Mother.

Gen. 1:26-27 『Then God said, “Let us make man in our image, in our
likeness…” So God created man in his own image, in the image of God he
created him; male and female he created them.』

The Will of God in Creating Eve, Adam’s Wife
Let us study more truth regarding the heavenly Mother through the character Adam, written in the book of Romans.

Gen. 2:21 『So the LORD God caused the man to fall into a deep sleep; and
while he was sleeping, he took one of the man’s ribs and closed up the place
with flesh.』

Gen. 3:20 『Adam named his wife Eve, because she would become the
mother of all the living.』

“I Will Raise Him Up at the Last Day”

Two thousand years ago, Jesus said, repeatedly, that He would wait until the last day to raise up all of the people who came to Him (John 6:39, 40, 44. 54). Why did Jesus need to wait until the last day to save His people? What was He waiting for? The account of the six-day Creation?in the book of Genesis, chapter one?represents the spiritual Creation which would take place over six thousand years. Just as the six-day Creation ended after Eve had appeared, so would the six-thousand year spiritual Creation end with the appearance of our spiritual Mother. Jesus could have given His people life during His first coming; however, Jesus waited for the appearance of the heavenly Mother because life would be given through Her.

The Wedding of the Lamb
Let’s study some of the testimonies about Mother written in the book of Revelation.

Rev. 19:7 『Let us rejoice and be glad and give him glory! For the wedding
of the Lamb has come, and his bride has made herself ready.』

The book of Revelation was written after Jesus had ascended, and it prophesied about the things that were to happen in the last days. Thus, “the Lamb” mentioned in the above verse indicates the Second Coming Jesus: Ahnsahnghong. When Jesus came to the earth for the first time, two thousand years ago, His wife was not yet ready. The Bride, the wife of the Lamb, would appear in the last days.

In the book of Revelation, chapter 21, the Bride?the wife of the Lamb?is described as “Jerusalem.”

Rev. 21:9-10 『…One of the seven angels who had the seven bowls full of
the seven last plagues came and said to me, “Come, I will show you the
bride, the wife of the Lamb.” And he…showed me the Holy City, Jerusalem,
coming down out of heaven from God.』

Apostle Paul testified that this Holy City, Jerusalem, which would come down out of heaven, is our Mother. Gal. 4:26 『But the Jerusalem that is above is free, and she is our mother.』

Gal. 4:28 『Now you, brothers, like Isaac, are children of promise.』

Gal. 4:31 『Therefore, brothers, we are not children of the slave woman, but
of the free woman.』 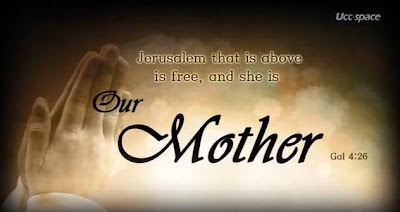